In 1981 Trac International Corporation 2546 NE Expressway, Atlanta GA 30345 envisioned a US-model moped made out of Korean, European and American made parts. The Laura company in Holland had just sold the production rights and equipment-tooling for the M56 engine to Daelim Motor Corporation (DMC) in Korea. DMC produced the Laura M56 (1-speed automatic) remake engine, Kia Motorcycle Company produced the frame and chassis parts, Magura (Germany) made the controls, Bosch (Germany) made the magneto, CEV (Italy) made the lights and electrical. For the “snowflake”mag wheel Eagle model, Grimeca (Italy) made the wheels. The plastic side covers (floorboards) were produced in the USA. That allowed Trac to put an American flag sticker on the bike. Production began in 1982.

In 1984 Trac added new models made entirely by Daelim. At first they had a kick start Daelim DK50 2-speed automatic engine.

In 1986 Trac added pedal start models with Daelim DP50 1-speed engines. The components were all Korean made except the Domino (Italy) controls. After 1986 the Kia-made models with M56 engines were discontinued.

There were no Trac-branded bikes sold outside of the US, but there were many Daelim mopeds and motorcycles sold and used in Korea. 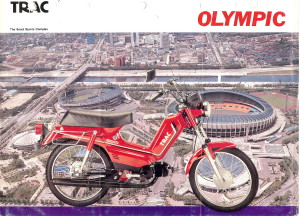 The Trac Olympic was named after the 1988 summer Olympics in Seoul, South Korea.

Part numbers are Honda format, where the model code is the middle 3 digits.

Format is xxxxx-xxxxx for hardware, and xxxxx-M56-xxxx for other parts.

The M56 model code is printed on some of the actual parts, like cables.

Parts specific to Hawk and Clipper are model code MT1 and MT2.

Alternate part numbers were in use. They were the yellow book diagram number, dash, and item number. For example part number E2-11 is diagram E2 (Engine 2) item 11, or F12-33 is Frame 12 item 33. This was easy, but became confusing later when the diagrams changed.

This stack of sheets replaced some of the yellow book pages.

These sheets were in the back of the 1986 dealer Parts List blue notebook.

They had the yellow book illustrations with new Trac 5-digit part numbers.

So there were 3 sets of part numbers in use, Daelim, diagram, and Trac.

This was the main parts manual in the 1986 dealer Parts List blue notebook.

This was in the blue 1986 dealer Parts List blue notebook.