Enjoy these pages from “CYCLES PEUGEOT – Structures of the Group” May 1977. This 72-page brochure with a plain silver cover, promotes Cycles Peugeot products, for Peugeot products dealers, sellers and business clients. 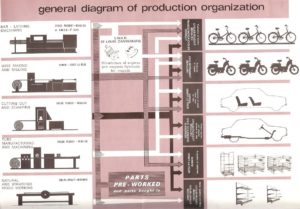 Peugeot mopeds were made in several different factory locations.

Beaulieu is the main production facility, where Peugeot frames, wheels, and parts were made, and mopeds are assembled.

Saint Louis is where Peugeot engines were made by SMHR.

Cerci la Tour is where Peugeot forks, fenders, racks were made, by SOMENI.

The SMHR Factory at Saint Louis

The Societe Mecanique du Haut-Rhin factory at Saint Louis is where Peugeot engines were manufactured. In 1977 SMHR was producing 3500 moped engines per day.

The Societe Mecanique du Haut-Rhin factory at Dannemarie is where Peugeot magneto flywheels were manufactured.

The Doubs Factory at Beaulieu

Doubs is the region, Beaulieu is the town. This is the main production center of Cycles Peugeot. Impressive, massive, mind-boggling. What would you call it? 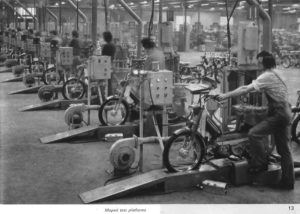