From I Love India .com:

Kinetic Motor Company Ltd. Kinetic Engineering is credited with bringing in India the concept of personalized transport. It is a part of the Firodia Group of companies, one of the pioneering groups in automobiles sector in India, founded in the year 1972 by Mr. HK Firodia, known as the doyen of the Indian Automobile Industry. 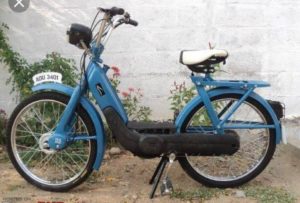 Kinetic Motors introduced the concept of personalized transportation in India in 1972 when it launched Kinetic Luna. Thereafter, it has been continuously serving Indian automobile industry.

In 1984, the company entered into a Joint Venture with Honda Motor of Japan, to produce advanced scooters in India. Both the companies introduced in collaboration a gearless scooter with advanced features like TLAD suspension, auto choke and auto fuel cork. In 1998, Kinetic bought the controlling stakes from Honda becoming the first Indian JV partner to buy out the foreign majority shareholder.

Kinetic has a dealership network of more than 400 dealers and authorized service centers across the country. It is a leading exporter of vehicles across the globe with thousands of vehicles exported to the United States, Canada, Latin America, Europe, Africa, the Middle East, South Asia, and Australia. It has bagged the Exports Excellence award nine consecutive years.

The company acquired Italiano series of scooters from Italjet Moto. The acquisition involved all global distribution rights as well as relocation of total production lines to India. Kinetic also has partnered with SYM Motors of Taiwan to produce some two wheeler brands.

Kinetic produces a complete two-wheeler portfolio which ranges from mopeds, scooterettes, scooters to bikes. Manufacturing plants of the company are at Pithampur (for scooters), Ahmednagar (for scooterettes and mopeds) and Koregaon (for bikes). 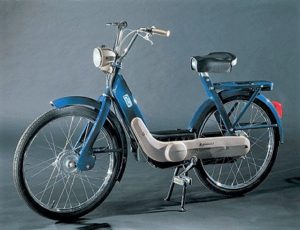 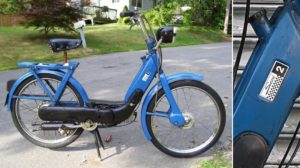 Soni 2 did not have the 1972 USA DOT equipment like the 1972 Vespa Ciao C7E did (tail light that shines to the sides, and a brake light that does not dim the headlight). 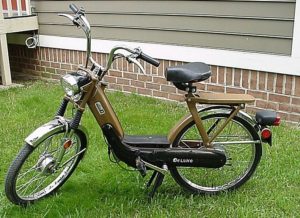 Kinetic Engineering Limited was the manufacturer, in Ahmednagar India, the label says.

Soni is not listed in any of the mid-to-late 1970’s US moped hand books. Yet here is a photo of a 1979 Soni with USA lights and reflectors. On the ’79 the seat support is moved forward where the frame is stronger, the fork is telescopic not cantilever, and the lights and reflectors are USA compliant. 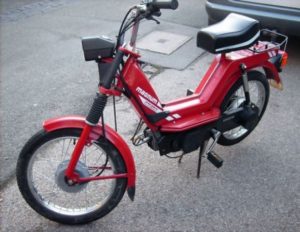 Kinetic Magnum was a  1993-2000 moped sold in the USA. The non-USA version was called Luna Magnum. It had a variable (two speed) belt drive instead of fixed (single speed), 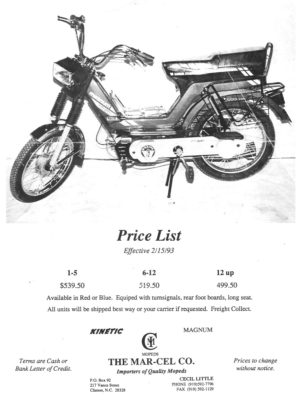 Mar-Cel Company was the importer to the US, in Clinton, North Carolina. The Kinetic Magnum has a stamped sheet frame and a Piaggio remake engine and drivetrain. It is similar to a 1980’s Piaggio Si.

The 1993 Kinetic Magnum in this sales photo does not have any USA-required lighting and safety equipment. It’s a two-person moped that says “V-drive” on the left (drive belt) side.

Each of these Magnum photos shows a bulge in the left rear side cover. That identifies a Kinetic or a Piaggio as a variator model. Single speed models have no rear bulge or not as much.

Kinetic TFR was a  1994-98 moped sold in the USA. The non-USA version was called Luna TFR. The TFR is essentially a Magnum but with a fixed drive pulleys instead of  variable “V-Drive”.

Cosmopolitan Motors was the importer to the US, in Hatboro Pennsylvania. During the 1990’s Cosmo also had a sales office in Los Angeles. This flyer says the address: 10850 Wilshire Blvd #400 Los Angeles CA 90024.

Thousands of Kinetic TFR’s were sold in the US, especially 1995 models. They had several colors, including purple, but black or red were the most common. 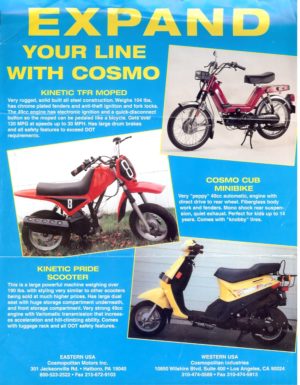 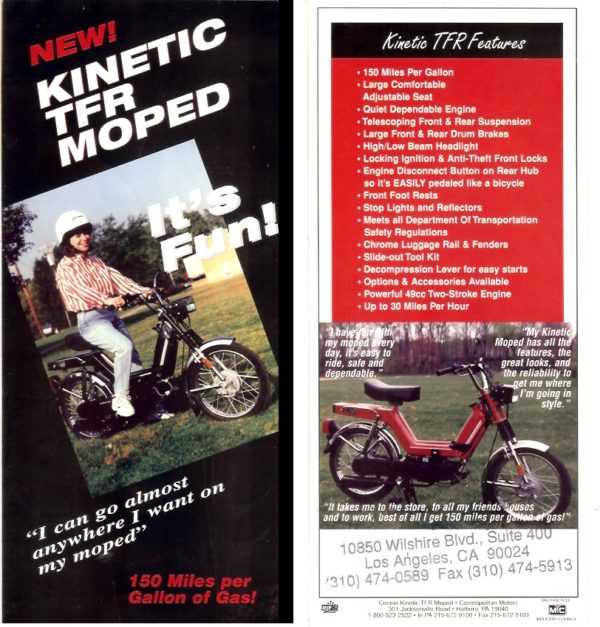 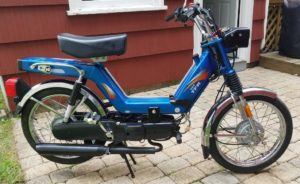 Kinetic TFR-USA was a  1999-05 moped sold in the USA, imported by Cosmo. The non-USA version was called Luna Magnum.

Kinetic TFR-USA is a partial remake of a Vespa Si, with a variator (variable-diameter v-belt pulleys) drivetrain. That and an improved exhaust (longer header) allow a TFR-USA to take off faster and climb hills better than a non-variated TFR. 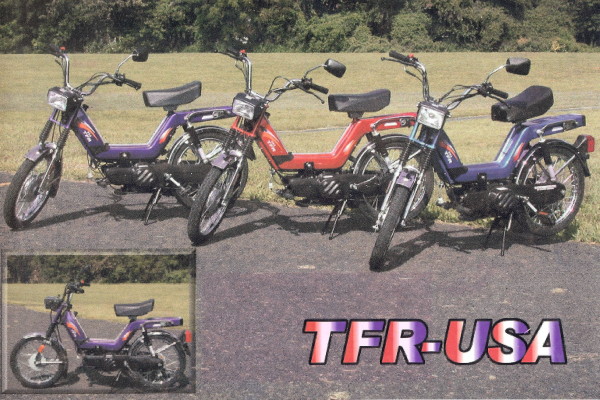 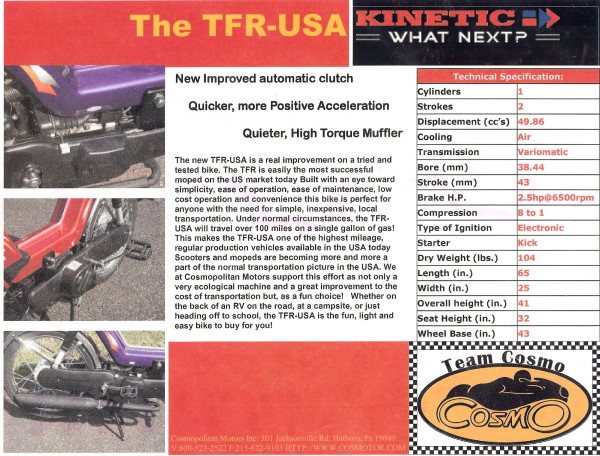