Hercules mopeds are commonly known as Sachs in the USA. We use the true maker name to avoid confusion with Sachs engines, which are used on non-Sachs bikes, like Sparta, General, KTM, and also to include the alias brand names Eagle, Pegasus, etc, made by Hercules. 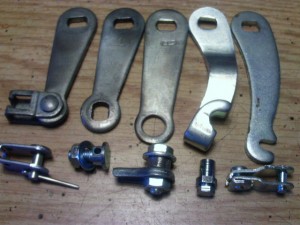 Early Hercules cables were all single ended, in the tradition of bicycles. The brake cables had clevis type pinch bolt ends, type 5 at the right. The clevis piece and adjuster are sold separately.

Later Hercules had double ended brake cables, in the tradition of motorcycles. They attached easily and securely to a clevis piece that was riveted to the lever arm. This made it safer and more fool proof, but also made the brake cables specific and difficult to get or make.

The early controls (not shown), here nicknamed “Early 1970’s Magura” had bottomless threaded holes, requiring standard M6-1.0 adjusters. After 1976-77 they had the “1970’s Magura” controls. The brake cable end holes changed from threaded bottomless to slotted with bottom, to accept either a plain cable or, optionally, a Magura type adjuster.

The Sachs external choke is part of the air filter box, front half. The Ø3 end goes in the plastic slide. The upper bare end requires a 5×7 pinch bolt for the right thumb lever. The design requires that the upper end of the cable be removed to install or remove the cable. (If there was a double ended Sachs choke cable it would require a Magura type adjuster to be adjusted way up/tighter to allow for installation slack).

Since this is a single ended cable, it does not matter if the carb elbow is long or short. The pinch bolt can be located accordingly.

All original Hercules cables had light grey plastic oil ports, located a few inches from the top end. Replacement cables do not have oil ports.