The name Derbi is from Derivats de Bicicletes (derivatives of bicycles).

From Wikipedia:  Derbi’s origins began with a little bicycle workshop in the village of Mollet, Spain near Barcelona, founded in 1922 by Simeó Rabasa i Singla. The focus remained the repair and hire of bicycles until May 1944 when Rabasa formed a limited liability company named Bicicletas Rabasa with the aim of moving into manufacturing bicycles. The venture proved very successful and in 1946, supported by its profits, work began on a motorized version. More moped than motorcycle, this first model, the 48cc SRS included plunger rear suspension, and a motorcycle type gas tank and exhaust system. The SRS proved so successful it prompted a change in the company’s direction, and on November 7, 1950, the company changed its name to Nacional Motor SA. Just prior to this, at that summer’s Barcelona Trade Fair, the company unveiled its first real motorcycle, the Derbi 250.

Unlike Ossa, Bultaco, and Montesa, Derbi successfully met the challenges that followed the Spanish transition to democracy and Spain’s entry into the European Community. Simeó Rabasa i Singla died in 1988 but the company remained independent until 2001, when it was bought out by the Piaggio group. 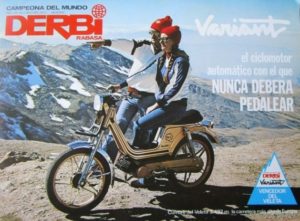 Derbi parts on 1970’s mopeds were mostly made in Spain. The Arbeo carburetor is a re-make of an Italian Dellorto. The Walker speedometer is a remake of a German VDO. The Motoplat magneto is made in Spain. Everything else is made in Spain by Derbi, except the lighting equipment is made in Italy by CEV Pagani. The reason was Spain’s high import tariffs and socialist economy. On late 80’s models there were more non-Spanish parts. The controls were Italian-made by Domino, and the magneto was Italian CEV. Gradually Spain’s trade practices became more like the rest of Europe.

Derbi lights: European models had Rinder headlights, square with angled sides, like the gold 1978 SLE on the right. US models had round CEV headlights because they were DOT approved. Euro versions had smaller tail lights and no brake light, while for-sale-in-US bikes had larger CEV 9417.2 tail lights that shine to the sides with brake light and side reflectors.

Nunca debera pedalear: “Never had to pedal” was the slogan in this Spanish ad. The bottom says “vane summit 3492 m (11,350 ft) the highest road in Europe”. Derbi was always setting records. In 1980 A Derbi SLE went around the world in 76 days. Derbi mopeds also crossed the Sahara and won world-class 24-hour competitions. The Derbi Variant was proven to be the world’s best moped in performance and capability.