G2 engine: (Gentlemen Due 49cc) is on US models 1977-80 Benelli G2, 1976-77 Benelli Blazer, 1978-80 Moto Guzzi, and 1977-80 Moto Guzzi Robin and UK models 1974-80? G2. The G2 engine is the second generation of the late 60’s GM engine, a 25mph horizontal cylinder one-speed automatic, with a Dellorto 9mm sipping straw. Like the GM, the G2 engine does not have built-in pedals. The external pedal system is unusual with both pedal and motor chains on the left side. Most bicycle chains are on the right side, so a special reverse or “left hand” freewheel is required.

G2K engine: (Gentlemen Due Kick 49cc) is on 1970-76 Gentleman, UK models 1974-80? Motorella, 1978-80? G2 KS and G2 Elle. Eliminating the pedals and pedal chain simplified the frame design, and allowed the rear wheel to have a single sprocket and bigger wheel bearings (since they did not have to pass through the inside of a freewheel).

The Benelli Blazer is made by Motobi. It is like a G2 but with a standard tube frame with separate gas tank. The European version is called Benelli Bobo.

Here two parts catalogs “G” and “B” are combined into one list. 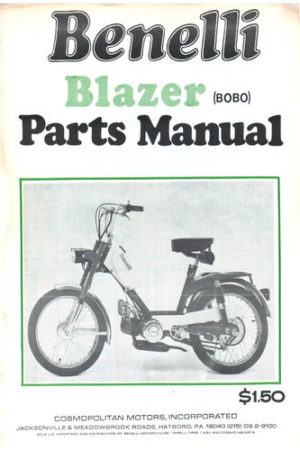 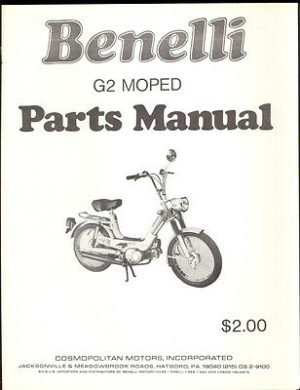 B. Rimoldi clutch
also on Puch

B. Domino
on Bobo

B. PV on
Blazer

B. Start cable for
Domino controls

B4. Benelli Bobo wheels and controls

Benelli Blazer-US: The USA version of the Bobo had the same parts catalog B1 to B4, except for the last page B5 that showed all of the changes. The controls (and start cable) changed from Domino to PV. A Veglia speedometer, cable and driver were added. The CEV 2139 “bullet” headlight was round, bigger, brighter and required more watts. The CEV 9350 tail light also was bigger, brighter and required more watts. The 6V 21/5W #1154 bulb had a brake light and the lens had side reflectors. The switches were CEV round chrome clamp-on type, with English language labels. Right thumb operates engine stop. Left thumb operates lights and horn. The Blazer magneto generated more watts.

4M engine: The 4M has a mild cylinder, with shorter and narrower ports, a 12mm ID intake, and a smaller 12mm Dellorto SHA 14/12 side-draft carburetor.

The 4M engine was on the 1968-69 Benelli Dynamo Compact. M means marce, Italian for “march”, or in the motorcycle industry “foot-shift”.

4MS engine: The 4MS has a “sport” cylinder, with taller and wider ports, a 16mm ID intake, and a larger 16mm Dellorto UA16S down-draft carburetor. Horsepower 4.5 at 7800 rpm. This is the version shown in the parts illustration.

The 4MS engine was on the 1965-68 Benelli Fireball and Fireball Trail, and 1969 Dynamo Trail and Super Mini. 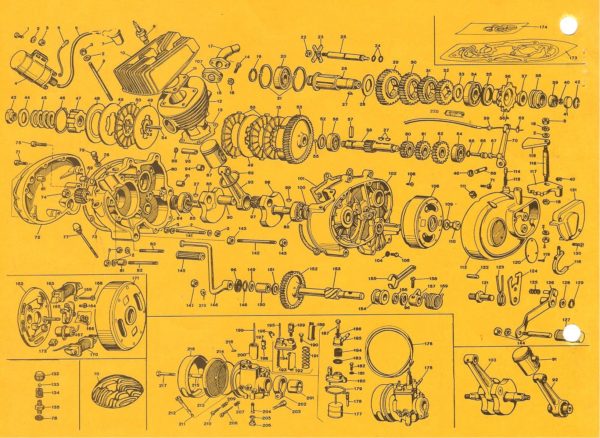 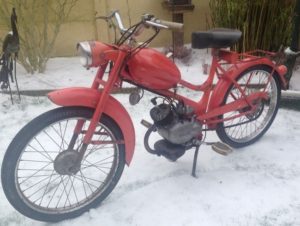 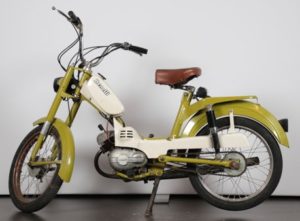 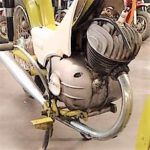 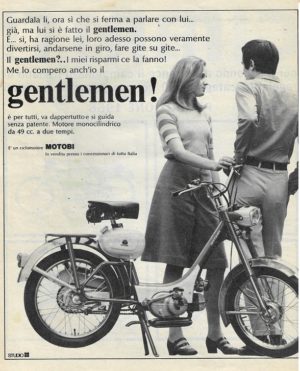 GM engine (Gentlemen Monomarcia 49cc) is on the 1965-69 Benelli Gentlemen (Italy model), father of the Benelli G2. It is also on the 1969 Benelli Maverick (US model), a front-gas-tank version of the Gentlemen. Notice the 1967 spelling of Gentlemen, not Gentleman. The Gentlemen spelling appears in several late 60’s official publications. 1970 official brochures said Gentleman. See Benelli’s with G2, G2K engines. Here we will use Gentlemen for 1960’s and Gentleman for 1970’s.

The GM engine has a Dansi MDP44 magneto and front-facing Dellorto SHA 14/9 carburetor. It does not have internal pedals. Instead both motor and pedal chains are on the left side, very unusual.

The Gentleman had a Domino left control with a start lever, instead of a left twist grip start control like the 1965-69 Wards Riverside had. It is visible in the photo. So it’s in bicycle mode all the time, until you pull the start lever. 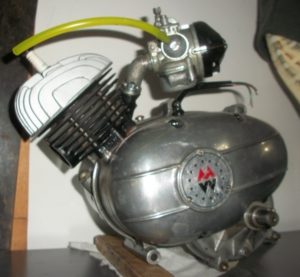 FA engine (Frizone Automatico) engine had an upright slanted forward cylinder, not horizontal like the GM or G2 motor. It was rounded everywhere, not mostly square like the 1970’s motors. The pedals were part of the motor unit, not separate like on the G2.

The 1965-69 Wards Riverside 150D and 250D mopeds, the 1974-75 Benelli 3FA moped. and 1976 Benelli Export FA had FA engines. The left grip was a twist grip that operated the starting clutch. Normally the bike is in pedal mode. Twist the left grip back to engage the motor for starting. Once started it is under automatic clutch control, engaged above 10mph and in neutral below about 5mph. The hand levers are hand brakes, left rear and right front. The controls are early Domino. Throttle is a wrap-around type.

The Benelli FA and M4 cylinders are the same as the Benelli M4S cylinder on the 50cc Fireball, except the porting. The Fireball cylinder has a 17mm (for the Dellorto UA16 carb) intake port at the flange, while the FA (and M4?) have a 10mm intake port hole (for a Dellorto 14/12 carb). The exhaust port is taller and wider on the Fireball. The transfer ports and intake port are also wider and maybe taller. 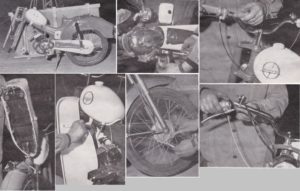 Mopeds with manual starting clutches usually have an extra hand lever below the left handlebar, for starting. Instead of a start lever, Benelli has a start grip. You pedal the bike, then twist the left grip, to engage the engine. Then let go once the engine has started.

Date: The date of manufacture is not stated on the ID plate or anywhere else on the frame. On 250D models with original speedometers, there may be a date stamped in ink, on the bottom of the speedometer shell. Remove the speedometer to see it.

Here is a link to the 1965 Wards Riverside Service Manual 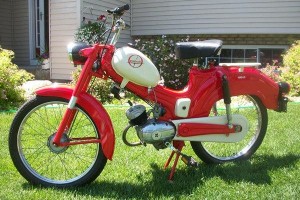 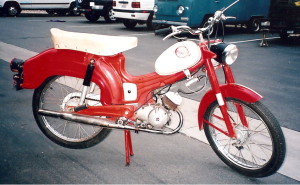 This is an entire 1965-67 Montgomery Ward Riverside moped parts manual, condensed, colorized with prices, availability and specifications added. It is combined with a 1976 Benelli Export FA engine parts illustration and parts list. In ten years not much changed except the starting clutch and maybe something else.

On parts that have different sizes, the 1976 part numbers say the size in millimeters, here colored in orange.

Minarelli G1 and others

Yet another 50cc Minarelli …

The C2 was on only a few deluxe US moped models.

The V1/V2/C2 cast iron cylinder was first used on the Minarelli P1.

Once again Minarelli made a two speed moped engine, but sales were less than they hoped for. The huge extra cost of the variator drive made it less affordable for most people. Morini had also made the M101, a two speed variator engine, and the MO2 two speed. But the Morini M1 reed valve one speed had better average acceleration than the Morini MO1 piston port two speed did, for a much lower cost and weight. By the late 1980’s, wise Minarelli gave up on two speeds, and “saw the light” of the one speed with case reed induction.

Myrons does not have specific parts for Minarelli C2, other than those parts that are the same as on a V1.

The late 1960’s P4 is still kick only, still has the rounded case of the early 60’s, but the cooling fins are bigger and more square, and head fins are angled instead of straight.

In 1967 the company name and logo changed, from F.B. Minarelli to Motori Minarelli. Here they showed off their new logo by making it as big as possible, filling an entire page width.

The 1970’s P4E has a not-rounded engine case. It has many versions; 5 different cylinders and heads, 5 different kick levers, 8 different  magnetos, 3 different carburetors, and more.

This was a 6-speed foot-shift manual clutch. Most were kick start. Some mid-70’s had pedals, for sale in England.

Myrons does not have parts for the models shown below, except things that are the same as V1. 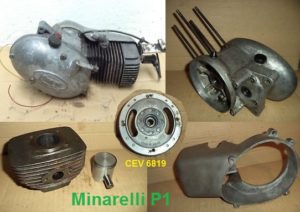 The P1 was a pedal start, no kick lever. Unlike most Italian mopeds the pedal system was external, rather than inside the engine, with both pedal and motor chains on the left.

This was a 3-speed hand-grip-shift with manual clutch. There were pedal and no-pedal versions. It had a bigger engine case than the P1, but still with the egg shape. There were two head versions, with a motor mount and without. 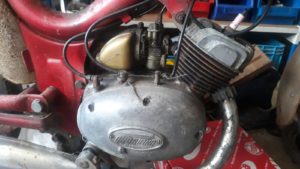 The motor was a carryover from the pre-Minarelli period of FBM.

This was a 3-speed grip-shift manual clutch kick start, no pedals.

It is fan cooled with a very curvy rounded fan shroud.

This was a one speed automatic with internal pedals. No fan or fan shroud. Some EZ parts are the same as V1. 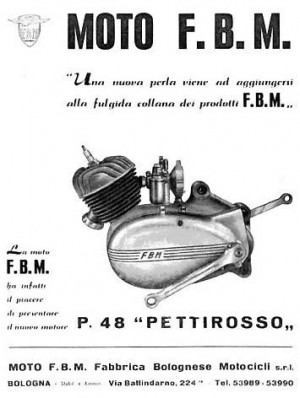 Testi and Sachs helped Minarelli: Since 1933 Testi was a bicycle company owned by Umberto Testi. Umberto’s son Erio Testi worked in his fathers bicycle factory. In 1953 Umberto sent his son Erio Testi to Austria to visit Fichtel and Sachs, and learn about small two stroke engines. After Erio returned, he was hired by Moto FBM, and transferred the Sachs two stroke moped engine manufacturing knowledge to his friend Vittorio Minarelli. That’s why early 60’s Morini, Minarelli and Sachs pistons have the same dimensions.

P-48: In 1954 the P-48 Pettirosso (red breast) was born, a 50cc 2-stroke 2-speed cable-shift engine, destined to become the engine for most popular mopeds in Europe, and later the P3 3-speed version.

Minarelli’s assistant Erio Testi helped develop those FBM moped engines, then later formed his own successful company. That is why Testi bikes all have Minarelli engines.

F. B. Minarelli (Fabbrica Bolognese Minarelli) 23 Via Melozzo da Forlì, Bologna, Italy was only four blocks away, formed in 1956 from the separation of Minarelli and Morini. The bike maker clients were divided equally in volume, Morini got Beta, Minarelli got the others.

From Wikipedia: In 1956 Minarelli switched to exclusively manufacturing two-stroke engines, in a 20,000 sq. ft. purpose-built factory. It employed 20 technical staff and produced 70 engines a day. These were sold to companies in Italy, other parts of Europe and South America.

Motori Minarelli: In 1967 the company changed its name from F.B. Minarelli to Motori Minarelli, and opened a new plant about 5 miles north, in Calderara di Reno. By the 1970s engine production had reached 250,000 units a year.

In 1990 the company began a business relationship with Yamaha. Five years later it employed 350 people and engine production had reached 450,000 units a year.

In 2002, following changes in the world motorcycle market, Motori Minarelli became a member of the Yamaha Group.

By the late 1980’s, mopeds were out of style, and scooters were popular. Minarelli made 49cc two-stroke scooter engines with variators all through the 1990’s and most of the 2000’s. Minarelli has always been behind the scenes, making engines for “everybody”, but not advertising or taking much credit. Many people who own certain scooters don’t know their engine is made by humble and wise Minarelli.