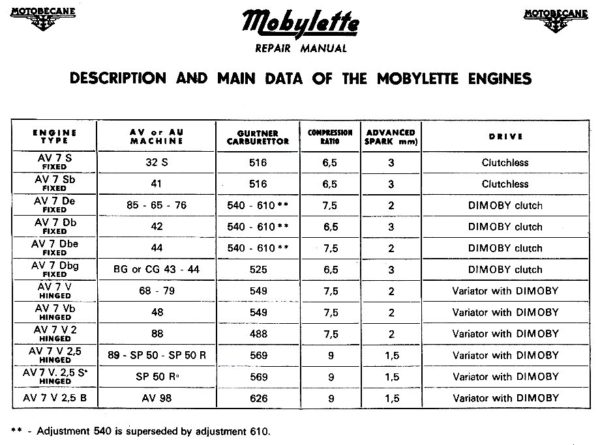 These are the Motobecane (AV) or Motoconfort (AU) Mobylette engine models and the bike models they came on. US bike models are red. Not included here are the alias brands Wards Riverside, Raleigh, Suvega engines with their models and MB equivalents.

Sources:
1. AV7 Engines Chart from Mobylette Repair Manual, official, but only goes up to 1969.
2. motobec.fr for their awesome library of sales brochures for each year, and parts manuals
3. Dating Your Motobecane from Ets Mauger for their excellent grid of years and models
4. Motobecane Club of France for illustrations and information
5. mobyjoost on The Mobylette/Motobecane Forum UK, a Mobylette expert and enthusiast
6. La bleue pour les bleus, on Le Monde en Bleue, another Moby expert
7. Mobylette Mopeds – Owners Workshop Manual by Haynes, covers 1965-76 UK models

AV3 Motobecane had been making motorcycles since 1922, but after WWII they switched to making motorized bicycles. Europe’s roads were bombed out, gas stations were gone, bridges were gone, so people had to walk or climb across streams and canyons carrying their bicycles and cargo. In 1949 a lightweight moped was born out of the ashes, called Mobylette (little mobility). It’s 50cc two-stroke engine had an aluminum cylinder with a steel sleeve. It had no crank seals. Both transfers were on the right side, and the piston had transfer windows and a ridge across the top. It was not at all symmetrical left to right. That is why the exhaust exits to the left.

AV3.5 This also had the early scavenging design (how to get the intake in and exhaust out in one piston stroke, without mixing or wasting any). Both transfer ports were on the right side. Improvements were 1) it had a hard aluminum cylinder with a hard chrome lining, 2) it had crank seals, 3) some models had a new automatic running clutch and automatic starting clutch. It was simply called “embrayage automatique”, not “Dimoby”. But it was the first Dimoby. Once the rear wheel was moving over 5 mph, the automatic starting clutch starts the engine. Once the engine rpms get above about 2000, the automatic running clutch begins to propel the bike forward.

AV7 S, AV7 De  The AV7 S and AV7 De (both 1.5 hp) had a improved, completely different scavenging design, known as Schurle Loop. Intake from the crankcase was forced upward around the left and right sides of the piston. Two streams were directed towards the intake side by the left and right transfer ports. They then merged and looped around, past the spark plug, towards the exhaust side, forcing out any exhaust gases. This was more efficient. In the 1950’s all two-stroke engines adopted this design. The piston changed to a flat-dome top, but the cylinder remained all aluminum with hard chrome lined cylinder wall.

The AV7 De exhaust had a new design, called blunderbuss. Inverting the expansion chamber made the exhaust short, allowing the engine to swing, while still allowing the exhaust to expand. The new compact exhaust design allowed a new swinging engine mount design. The AV7 De V-belt was held at a constant tension automatically by a spring, instead of bolted solid and adjusted periodically.

AV7 V The AV7 V (1.5 hp) had a variator, which is a belt drive with one or both pulleys that vary in size. The belt is a V-belt that grips from the sides of the V. It sinks down deeper between the V-shaped sides of the pulley, as they move apart, and raises up higher between the V-shaped sides as they come together. A set of 4 or 6 steel balls roll outward when the engine rpms increase. That forces the pulley sides together, causing the V-belt to ride higher. The result is the engine rpm stays the same as the bike accelerates.

The blunderbuss short exhaust allowed the engine to swing about 20 degrees. Below 15mph the engine is forward, in low gear, and above 25mph it is rearward, in high gear. Amazing!

AV7 V2, AV7 Dbe The AV7 V2 (2.0 hp) and AV7 Dbe (1.5 hp) are 95% the same as the preceding AV7 V and Db. Only the crankshaft, crank bearings, and piston changed. The old crank axles were 15mm everywhere, and took standard bearings 6302 (15 x 42 x 13) MB#00518. But installing the press-fit bearings meant dragging the clutch side bearing over the clutch clip groove and needle bearing surface, sometimes getting stuck or causing harm. The new crank was thicker at the bearings, 16mm. The bearings no longer damaged the crank during installation, but were not standard. They were special 6302-QR (16 x 42 x 13 with rounded inner edge) MB#16906. The AV7 V2 illustration does not show the 15-to-16 step in the crankshaft, because it is the older AV7 V illustration, but it does show the new crank and bearing part numbers.

The piston design did not change. But the piston was offered in many slightly different sizes or “sorts”. The AV7 V parts diagram said 14820 for the piston, but the AV7 V2 said nothing. That is very subtle. There was a separate sheet for pistons with over ten different part numbers and sizes. Because not all of the plated cylinders are made to the exact same diameter, before this you had to sand the piston if it happened to be too tight for that cylinder, or settle for a loose fit like a worn engine has, if it happened to be too loose.

AV7 V2.5 This was a late-1960’s 2.5 horsepower version, instead of 2.0 or 1.5 hp. It had noticeably different head fins that run at an angle instead of straight back. Both the cylinder and head fins were wider. 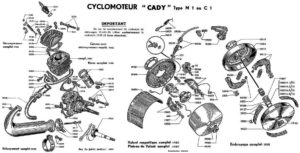 M1, M3 These late-60’s and early-70’s moped engines had the Dimoby dual clutch with drive belt, and magneto behind it, both on the left side. They were called Isodyne engines, which roughly means “same side”. Wierd, like Solex!

AV7 Vb, AV7 Dc These 1970’s models most notable differences are the square shape of the cylinder and head cooling fins (instead of round) and the all-chrome exhaust (instead of painted rear section). Many things became square in the 70’s.

AV7 Z This 1977-only engine was a unique design. On top it has big fins and a piston-controlled reed valve. So the piston has an intake window. But look under the crankcase and you will see a second cylinder and piston. It pressurizes and depressurizes the crankcase every revolution. It is timed to be lowest pressure during the intake process, and highest during the transfer process. It is a supercharger for a two-stroke engine. But the production did not last long.

AV10 In 1978 Motobecane came out with an improved and  modernized engine design. Case reed induction is where the carburetor feeds the crankcase through a reed valve, instead of the back of the cylinder and under the moving piston. This changed the back-and-forth flow of piston-port induction to a unidirectional stop-and-go flow. The result was better performance, like 20% more low-rpm torque.

In 1981 Motobecane became bankrupt. For 2 years nothing was produced. Then they were bought by Yamaha, and their name changed to MBK. Production resumed in 1982.

By the mid-80’s pedals were no longer mandatory in most countries. So many of the mid-80’s MBK mopeds have kick-start with foot-pegs instead of pedals

This entry was posted on Sunday, January 10th, 2021 at 6:28 am and is filed under Media. You can follow any responses to this entry through the RSS 2.0 feed. Responses are currently closed, but you can trackback from your own site.