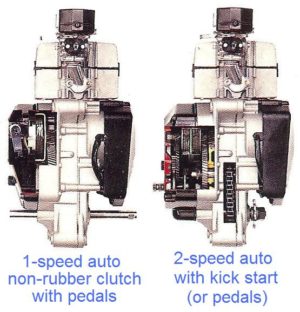 Vertical cylinder two-speed engine (G2 and V2): The Gulpmatic and VIP models had an upright cylinder (spark plug pointing up). Most of the engine was different from the horizontal engine on the other models. The front motor mount was in the head. The exhaust header was screw-on, not flange bolt-on. The drive chain was still on the right, unlike most other mopeds.

This entry was posted on Saturday, December 26th, 2020 at 8:45 pm and is filed under Garelli Engines. You can follow any responses to this entry through the RSS 2.0 feed. Responses are currently closed, but you can trackback from your own site.