Testi    made in Italy by Testi    Minarelli V1 engine

Testi and Minarelli learned about two-stroke engines from Sachs: Umberto Testi’s son Erio Testi worked in his father’s bicycle factory until 1953, when he was sent to Austria, at Fichtel and Sachs, to learn about small two stroke engines. After Erio returned, he transferred the two stroke engine knowledge to his friend Vittorio Minarelli. Vittorio then later went on, after years of automotive engineering study and practice, to form Fabricca Bologna Minarelli FBM, which sometime later became the successful Motori Minarelli. That is why all Testi’s have well-made Minarelli engines.

Testi makes Gitane, Cosmo Amico, Silver Foxi, and other minor brands. Like Minarelli, they were modest and “behind the scenes”, content to sell their products “plain” so that marketing companies could put their own names and logos on. Marketing names wanted you to think they made it themselves, so they would hide the true maker identities. 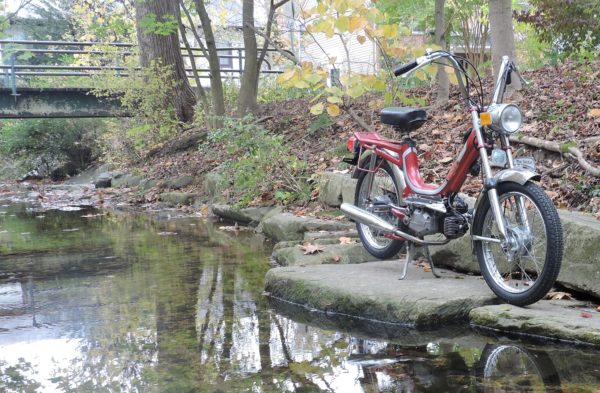 Comparing all of these photos, including the European models, you can see the Cricket is more heavy duty than the Mini Cricket, thanks to a reinforced frame, stronger rear shocks, wider fenders and tires.

The original controls on most Testi mopeds are made in Italy by PV. But the 1977 Mini Cricket is shown with German-made Magura controls. That is likely an upgrade, because the PV controls break easy.

The elusive Minarelli V2 variator engine is 100 times less common than V1. Here is one.

This entry was posted on Friday, July 13th, 2012 at 11:08 am and is filed under Testi Parts. You can follow any responses to this entry through the RSS 2.0 feed. Both comments and pings are currently closed.