Fox made in Italy by Rovet   Zanetti front engine

Most Safari mopeds were sold at eastern US moped shops, mostly New Jersey, Maryland, and Florida. Almost none were sold in California, so Myrons Mopeds has no Safari literature or Safari-specific parts.

Scat: In 1968-69 MBI contracted MZV of Bologna Italy to produce mini-bikes and mini-cycles using the Zanetti engines. They were given the brand name Safari Scat. Apparently the Safari Scat mini bike line of the early 1970’s included or became street legal full size mopeds with off road tires and fenders by around 1979. There are currently no pictures or details of those early Safari Scat mini bikes. There is only this 1979 Safari Super Scat.

Rovet: In the early 1970’s MBI went in partnership with an Italian engineer and started their own bicycle manufacturing company, named Rovet. In 1975 Rovet made the Safari Rovet, using the Zanetti front engine. Unlike the Bicizeta that was a folding step-thru frame, the Rovet was non-folding. It produced 1 hp, went about 19 mph, and was DOT approved for US streets.

Ridget and Super: In 1975-76 MBI began to import complete mopeds, made by MZV with Minarelli V1 engines.

Fox: In 1976 the front-engine Rovet became the Fox. Two thin frame top-tubes were added. That made it no longer a step-thru frame.

The heavy DOT tail lamps were too much for the thin stainless steel rear fender. The fender would eventually break at the tail light mount holes. To fix this, Safari had the 1977-later frames made with a large 1″ x 2″ steel washer welded to the back frame bar. The tail lamp was relocated there.

These early Safari’s, from 1976 until mid-1978 all had the Minarelli flattened can type exhaust, nicknamed “pancake exhaust”. Most were the 40kph (26mph) speed version for Italy, which was OK for either 25 or 30mph US states. Some were 20mph versions with a different piston, a smaller carb, 9mm instead of 12. After mid-78 they had long exhausts, which upped the speed from 26 to 29mph.

New Safari models for 1978 had motorcycle style top mounted gas tanks. New model names were 300 MT and 400 MT (for Motorcycle Tank). The motorcycle tank models were more popular, in the US, than the step thru versions. 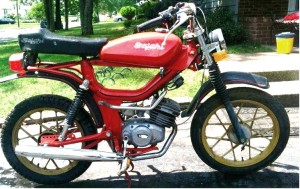 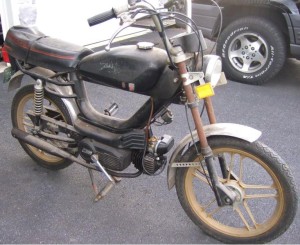 New for 1983-84 is the Minarelli C2 “continuous two speed” engine, on the Safari “Variomatic”. It has a variable belt pulley system, where one pulley gets bigger while the other gets smaller, continously. It is called a CVT continuously variable transmission. The result: quicker take off and better hill climbing! 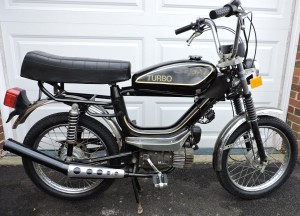 1984-85 began the newer Minarelli V1-H engine, improved with an aluminum cylinder and more cooling fins. This eliminated the need for the fan and the fan shroud. The V1-H still had the piston port intake design of the older V1. The case ID has a cast “V1”, plus a stamped “H” after it.

With the floorboards on, the Minarelli V1-H looks exactly like a later V1-L. But look under the floorboards and you can see the intake goes in to the cylinder, not into the crankcase, like on the V1-L “case reed” engine.

The V1-L one speed case reed engine had more take-off power and torque to climb hills than the V1-H piston port. So there was less need for all the complexity, extra cost and extra weight of the Minarelli C2 two speed engine.

Note that Safari mopeds did not say the model name anywhere. As a result, many people call their Safari mopeds the maker name, MZV, since that is the only other name on the frame. Also the model name MZV is used because it is what Safari’s are called in Italy and Europe. There is very little information about MZV in the Wheels of Italy pages, or anywhere else.

Safari lasted much longer than most US brands, 1975 to about 1991. Thanks to, and hats off to, Mr. John Oddone, for the info about his father’s company MBI, and Safari early models and history.

Here is a 1980 Safari Owners Manual. Thanks to Moped Central.

These Safari brake pictures are for reference.

This entry was posted on Friday, July 13th, 2012 at 12:12 am and is filed under Safari Parts. You can follow any responses to this entry through the RSS 2.0 feed. Both comments and pings are currently closed.