cer is not in the WoI Encyclopedia, but Italtelai is. Italtelai began in 1972, and means “Italian frames”. They made chassis for Arciero, Bianchi, Pacer, Portofino, Snark, and other US export models. They all used Motori Morini Franco engines and Spisni Franzoni forks. 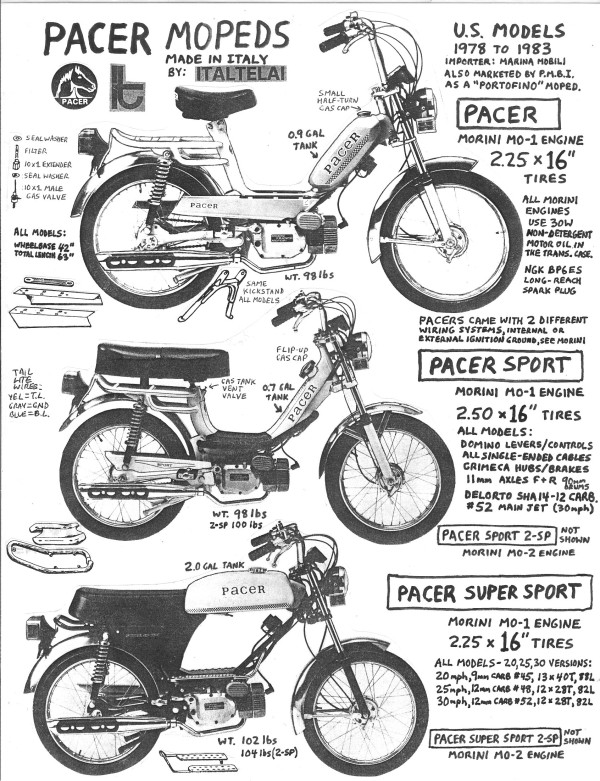 The Pacer brand name and logo was created in 1976 by Portofino International Inc, PI, at 55 Lamar St, West Babylon, New York. Some of the early Italtelai’s were labeled as Portofino. By 1978, PI became Portofino Moped & Bicycle International Inc, PMBI, at 495 Smith St, Farmingdale New York. By 1980, PMBI sold the Pacer name and inventory to Aeon International Corporation, AIC, at 2165 Fifth Ave, Ronkonkoma, New York. By about 1982, AIC sold the Pacer name and parts to Marina Mobili Inc, MMI, at 146 W Commercial Ave, Moonachie New Jersey 07074. MMI imported and distributed Pacer mopeds and parts to USA moped shops until around 1990. All of this comes from the front covers of 3 owners manuals and 2 work shop manuals.

There is a modern Pacer moped, made by Hero Majestic, in India, in the 2000’s. That is a “horse of a different color”.

This entry was posted on Friday, July 13th, 2012 at 10:48 am and is filed under Pacer Parts. You can follow any responses to this entry through the RSS 2.0 feed. Both comments and pings are currently closed.