Kynast Otto Gmbh & Co. KG began in 1946 when Otto Kynast, pronounced “key-nest”, started a small hardware and household goods store in Badbergen. They began making steel tube products. The first bicycle was produced in 1950. By 1966, around the year that Otto Kynast died, they had made 1 million bicycles, and was the biggest bicycle factory in Germany. By 1985 Kynast had made 16 million bicycles. But sales slowed more and more in the 1980’s because of low cost, high quality Asian bicycle frames. Eventually Kynast was bought up by the huge conglomerate, Derby Cycles, after several bankruptcies. Read more Kynast History. 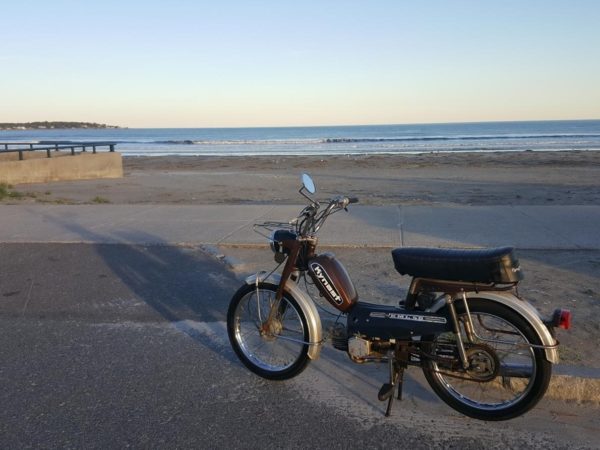 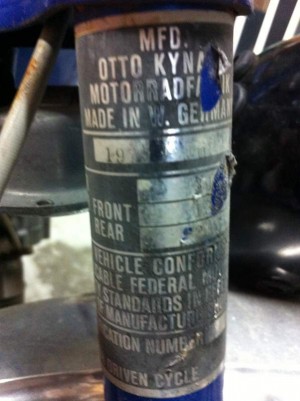 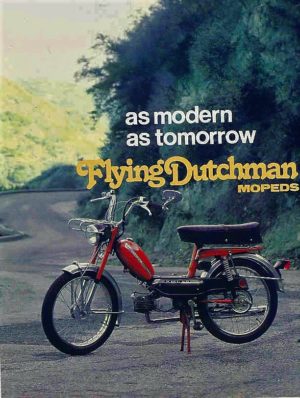 Flying Dutchman Moped and Bicycle, Inc was a company made by Ted Van Der Kolk Sr, at 509-511 E Broadway, Glendale CA 91205, one block west of city hall. Ted Sr. was the businessman and his son Ted Van Der Kolk Jr. was the mechanic.

Ted Sr. grew up in Holland (now called Netherlands). He had a moped shop there, as well as souvenir shops in the Dutch West Indies, before moving to California in 1972. He was already selling Sparta mopeds and bicycles in Holland. His shop in Glendale, just north of Los Angeles, was open from 1972 to 1991. John Cochran worked for Ted Van der Kolk Sr. for awhile, then later formed is own shop, T. and J. Inc, at 3518 Firestone Blvd, South Gate CA 90280, just south of Los Angeles. Later T and J (Ted and John) became Moped City, a few doors down, South Gate California.  Most of the Flying Dutchmans in Southern California came from those three shops. Besides teaming up with Van Der Kolk, John Cochran made one of the first moped expansion chamber exhausts, and employed Carlos Rodriquez as main mechanic at Moped City. John Cochran died in 2004. The “Flying Dutchman”, Ted Van Der Kolk, Sr lived until his late 90’s, and died in 2013. Ted Jr was alive at age 75, in 2017. 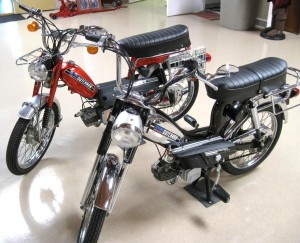 Sparta and Kynast: There are two makes of Flying Dutchman’s, Sparta (made in Holland) and Kynast (made in West Germany), pronounced “key-nest”. The Sparta Flying Dutchman models (front tank “Deluxe” aka “Buddy” and rear tank “Lucky”) are in Sparta.

Altogether about 5000 Flying Dutchmans, half Sparta and half Kynast, were imported and sold only at Southern California moped shops,  according to Ted Jr. That is why not many people outside of California have ever seen one.

All of the Kynast-made Flying Dutchman’s have the model name KML 40 on the sides of the one-piece black plastic engine cover. Their original speed was 40kph (25mph), but these US models are 30mph versions.

Euro models: The Kynast Euro models KML 40, KML 25, Bully 4000, Eurostar, and Kynast US model Flying Dutchman, share the same frame. It is apparently their own design, rather than a remake of an older design, since no other mopeds use it.

Note that the Kynast Flying Dutchman KML 40 is different from the Dutch Airline KLM, even though they both fly with Dutch people on board.

Then and Now: At some point, the German motorcycle giant Hercules must have bought the machinery to remake the Kynast moped. Here it is 35 years later, at left, still with Sachs 504/1D one speed engine , restricted. Everything is powder coated, not chromed. It probably also has other modern amenities like sealed bearing wheels, and nylon lined cable housings. 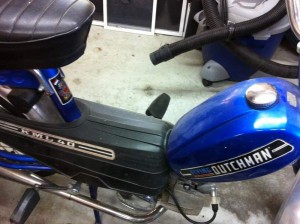 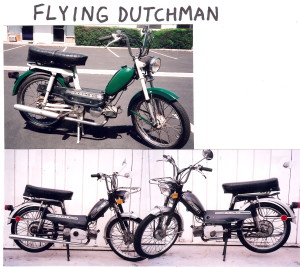 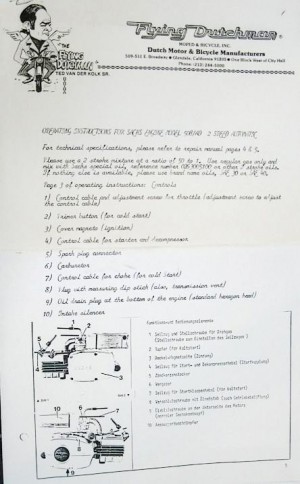 This rare Sachs 508 two speed engine is not mentioned or listed in any of the common Sachs engines web pages, even in Germany. Most Sachs two speed moped engines in Europe and worldwide are manual shift. They have a left hand grip twist shifter, that says “0-1-2”. But the Sachs 508/A is fully automatic and has no shifter or shifter cable. The US requires mopeds to be fully automatic, but European countries do not, so the Sachs 508 is likely designed for the US market. It’s speculation why it is so rare and unknown, but maybe it was too late in the game. By 1980, US moped sales were much less than in 1978, the peak year of the moped boom, following the gas shortage of 1973-76. 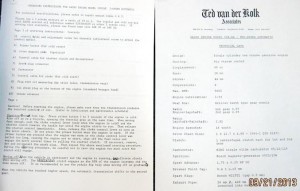 One final note about the elusive Sachs 508. Some of the later Sachs 504/1A one speed automatic engines, said 508/ cast into the left side of the engine case, near where the start cable goes in. This suggests that maybe Sachs was trying to fit a two speed automatic transmission into the existing 504 engine case. Perhaps because that design failed, they had to re-design an entire new engine case, with the right and left sides reversed. That probably took an extra year or more, making it too late to become popular. 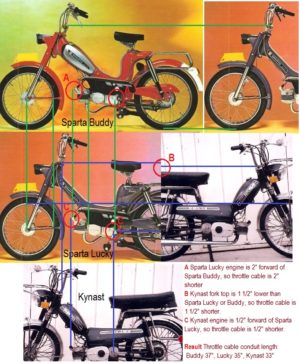 This entry was posted on Thursday, July 12th, 2012 at 11:50 pm and is filed under Kynast Parts. You can follow any responses to this entry through the RSS 2.0 feed. Both comments and pings are currently closed.