Occasionally new mopeds, 2008 and later, leak transmission oil (ATF) at the front chain sprocket. The chain then slings the oil onto the rear of the bike. Here’s why. 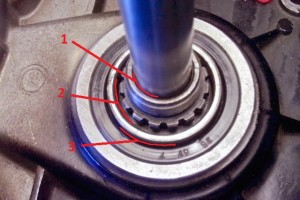 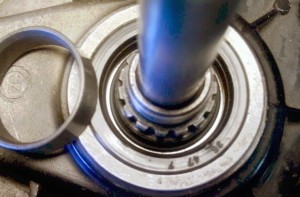 With the distance bush removed you can see the thin o-ring #31 (033007). The white surface around it is the inner race of the big ball bearing #22. Click to enlarge images.

Sealing the coaxial drive is tricky. Oil can leak from three concentric circles.

1. Leaks from inside the drive shaft

Pressed deep into the center of the coaxial driveshaft #23 (223453) is needle bearing #24 (033502). It’s left end has a thin rubber seal. This generally does not leak except in some high mileage machines, or if it is damaged during installation of the pedal shaft by a sharp corner at the end of the pedal shaft, such as caused by crashing or abuse. Tomos intentionally rounds the left end of the kick starter/pedal shaft, so it can’t cut the seal as goes in. When this “inner” seal leaks, the whole engine must be completely disassembled, to replace the driveshaft #23 (223453 for pedal, 223456 for kick), complete, at a cost of about $150 parts and $250 labor. Total $400. This is Option 1A, the way Tomos says in the 1985 A3 Service Manual, “In case of damage to the needle bearings in the main shaft, we suggest it’s replacement with a new complete main shaft.”

Alternatively, the motor can remain installed and assembled, except for the transmission gears and shafts, which are removed from the right side. Then it is possible to remove the leaking left needle bearing from the drive shaft on the right side. A very special custom modified inner jaw slide hammer type bearing puller tool is necessary. Then the cost, in most small shops, is about $220 for making the tool, plus $150 labor, plus $30 parts. Total $400. This is Option 1B, for skilled toolmakers. It is not in any Tomos service manual. But Tomos does sell the parts to do it. 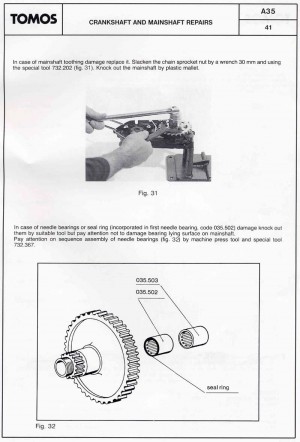 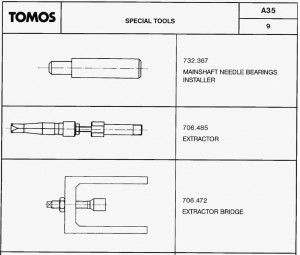 Left, Tomos says in the 1992 A35 Service Manual, in case of damage to the inner main (drive) shaft seal or needle bearings, to remove them using a suitable tool, and install new ones with press tool 732.367.

Right, the installer 732.367 with a 16mm to 20mm step. The extractor 706.485 and extractor bridge 706.472 are for extracting the 12mm ID left counter shaft bearing, and the 12mm wheel bearings. Apparently, Tomos does not say how to extract the 8mm and 10mm ID transmission cover bearings, and the 16mm ID drive shaft needle bearings, in any of their manuals.

Much skill and craftsmanship is required to select, make or reshape the tool. Otherwise it tears up the delicate needle bearing, leaving the thin shell stuck in the bottom of a deep hole. That mess takes hours to clean up. The bearings are painstakingly peeled off in small pieces, like peeling a stubborn steel orange that’s down in a tight hole. You can barely reach it and see it. But you save $100. 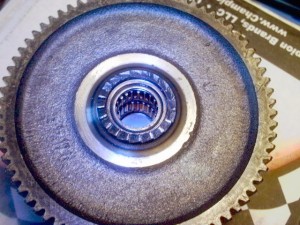 Left, a Tomos drive shaft 223453 showing the two needle bearings installed. The kick driveshaft 223456 is identical except it is smooth and flat where the ring of ramps is. This particular one has broken all of it’s ramps off. The deepest bearing 033502 has a rubber seal at the left (deepest) end. Above it is 033503, another needle bearing, not as wide and without any rubber seal.

Right, the puller in action. Below right, the bearings are out, but still on the puller. 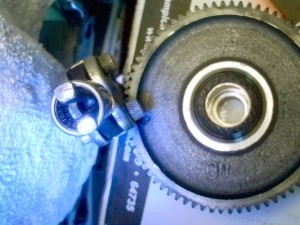 Left, the two jaws must fit the 2o.5mm OD yet pass through the 16mm ID.  Wider jaw lips and more jaws would be better. 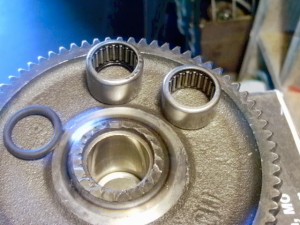 Right, the empty drive shaft with it’s bearings out, plus a thick rubber o-ring #30 (033006). The o-ring is an upgrade that comes on the newest bikes, 2012 and 2013. It is a heavy duty back up to the little seal in the left needle bearing. Left to right, the o-ring goes in the hole first, then the bearing 033502, seal side down, then the bearing 033503. These things are super easy to put in, just press straight in, with precise hammer taps. But they are super difficult to get out, even for professional mechanics.

These two ways of fixing the inner leak, Option 1A and 1B, are very difficult and/or very costly. They are the options that use Tomos original parts. 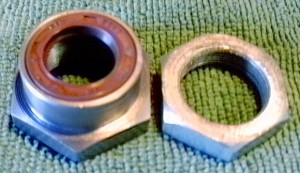 At left, the upgrade nut, uses a 32mm wrench, precision machined to accept an off-the-shelf 16 x 24 x 6 metric oil seal. At right, an original Tomos front sprocket nut, M22 x 1.0, uses a 30mm wrench. This is only for when the back side of the sprocket is bone dry, and the pedal shaft is dripping wet where it exits the drive shaft, which means the leak is from circle 1, inside the drive shaft only.

2. Leaks from outside of the drive shaft

Before 2008: metal to metal in three places

After 2007: o-ring upgrade, no more metal to metal

Before 2008, a scratch on any one of those metal surfaces would cause a leak. But that almost never happened. The parts were always made precise and smooth. What’s funny is that the oil seal #21 rarely or never leaks. Until ’07, only a loose sprocket nut caused a leak. The sprocket and distance bush were almays made flat and never leaked. In 2007 we started seeing wavey sprockets. Dished sprockets on Revival, Streetmate, Arrow had their washer tab hole too far in towards the center. Myrons used to weld part of that and grind flat. Flat 26T sprockets 209078 were made warped by the stamping. Also in 2008 many distance bushs had deep gouges in them. 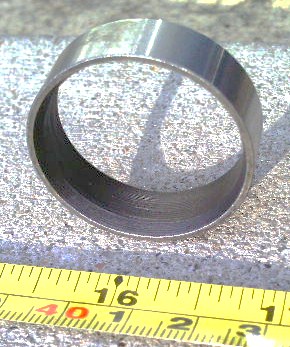 Tomos upgraded the 209077 distance bush by wedging an o-ring in the corner of driveshaft #23, bearing #22, and the back side of #20, and cut a bevel (about 30 degree angle) cut on the inside back corner of #20, to compress the O-ring as the sprocket nut is tightened. Then the wavey sprockets didn’t matter, since the O-ring stops the oil from reaching the sprocket in the first place. Even though they had the right idea, there were several problems with the 2008-2009 O-ring-sealed distance bushes 209277. Some were installed beveled side out instead of in. Some were made without enough bevel, also cutting the O-ring #033007. The dark colored distance bushes, made in India, in the current (2009) parts inventory are made right. Their bevel is 2.6mm wide. At least some of the ones coming on the 2009-later bikes are made with only a 2.0mm wide bevel, which somtimes pinches the o-ring during installation.

3. Leaks from outside of the distance bush 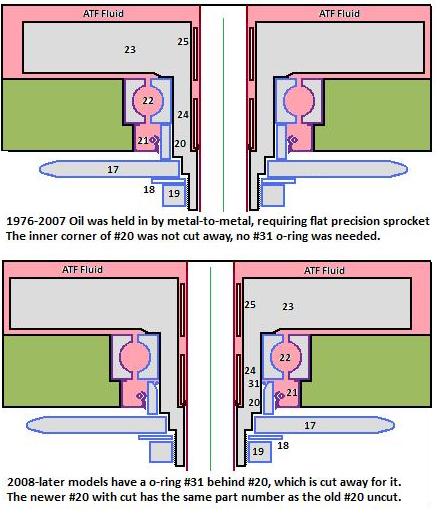